Two nights before Cyclone Marcia hit us, I phoned my sister from the beach at about 10pm and told her that despite the fact that I was carrying chairs up a hill in the dark, that I loved my life – the excitement and adventure of it all, and that running an accommodation business and living on an island in the Pacific means that sometimes you have to run around in the night stashing furniture – but what the heck, I wouldn’t swap it for anything!

Two days later, we had all but exhausted ourselves and were sitting in the rental house watching 75 knot gusts rock trees and sending branches flying across the lawns. Cyclone Marcia was a Category 5 cyclone and the winds close to the eye, further up the coast would have been very strong and destructive, but on Great Keppel Island we were well away from the eye and only received a good dusting up and a good washing down. Still, it was pretty impressive.

After about 3 hours of gusts to 50 plus knots, and about an hour of gusts to 70 plus knots, we wandered around to inspect the damage. We were SO lucky! The lawns were all covered in broken branches and debris – but none of the trees that fell did any damage to any of the buildings. We feel very blessed, because it could have been a lot worse! We have two luxury safari tents and the amazing thing is that they stood through the blow and didn’t even get one single scratch – not even a tiny rip of tear! When you consider that 17m trees were blown down next to them – that is astonishing!

Since the cyclone, we have had guests visit – and they have walked to the Lighthouse and to the other side of the island. They report that although you can walk through, there are lots of trees across the track, which will be cleared away in the coming months.

The town of Yeppoon was closer to the eye and received a bit more wind than us. About 100 houses were severely damaged. Their electricity was out for about 10 days to 2 weeks. It was truly eerie to look across to the mainland the night after the cyclone and see no lights whatsoever! Just pitch black! We usually see the lights of all the little towns along the coast from Emu Park to Farnborough. All we could see was the reflection of the star Canopus across the wet sand. Eerie – but magical as well! I was told that the families had no electricity and no lights or cooking, so they went in small groups and made fires out of the debris on the beach to cook their evening meals. What a strange image in modern Australia!

At the height of the cyclone, I heard the head of the mainland Tourism Organisation talking on the radio saying “Great Keppel Island has been trashed” – she wasn’t here and this was pure nonsense! In fact, we have totally recovered and are fully operational. The bad media create by this misreporting has had an effect on our numbers; – but spread the word! – “Everything is beautiful in Paradise again!

About the Author: admin

Snorkelling on the Great Barrier Reef

Snorkelling on the Great Barrier Reef 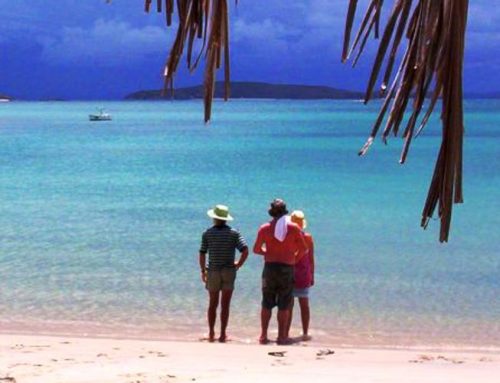